Yesterday, a group of Sisters drove up to Sacramento for the Healing Arts fair. Sister Nia took these photos. You haven't met her, yet, but you will. 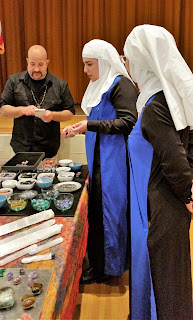 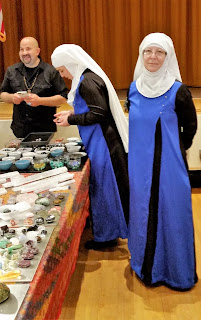 During the two days preceding our girls-day-out, we had an uncomfortable number of interviews. Skype interviews, where we all take turns sitting at my computer, the only one set up for Skype in the office, connected to the only good headset we own, and there was much chatter and concern about the interviews.

When I have media, I always warn them that I’m the chatty one.  If they want a lot of words without a lot of effort, they speak to me.  But then I also warn them:

(a) these Sisters didn’t come to work with me for media attention.  They didn’t come to be public speakers.  They came to made medicine and work with the plant.  So, speaking in front of a camera doesn’t come easily to any of them.

(b) the young ones haven’t found their voices yet. 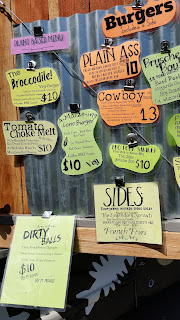 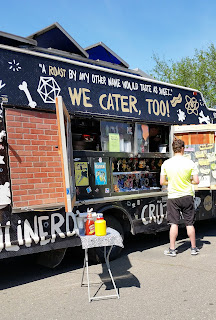 Vegan eats!  Affirmation that we are out of the valley.

As soon as we got in the car at seven forty-five yesterday morning, Sister Nia asked Sister Freya how her interview went the evening before.  And Sister Freya laughed and said she found her ‘interview-super-power’.  She did a reading on the interviewer.

Sister Freya sees spirits and in this case, there was much unresolved between the interviewer and her father, who crossed over by suicide – we don’t know exactly when.  But that spirit was there, wanting to speak to his daughter, and Sister Freya, faced with sending him away or offering some healing to this young woman on the TV screen, chose for the latter -- true to her calling as a healer.

Although Sister Freya was delighted that she got out of the interview, the whole scheduled hour given over to medium-ship between the deceased father and his daughter-in-pain-on-the-earth-plane, Sister Nia and I were sad that the young reporter had to deal with such serious tragedy.  We are both empaths and we both felt kicked in the gut at the news.  Without words spoken between us, Sister Freya felt our sadness and added, “Oh, it’s worse than that, even.  Her mom isn’t handling it at all and is at risk of suicide herself.  I’ve scheduled two more calls with them this weekend.”

That was some solace.  The Sisters can do something.  Sister Freya is intervening to offer medicine.  A silent prayer went up for her success, and then the conversation returned to her glee over having dodged the bullet of the interview.

“You really don’t like interviews?  It’s all basic stuff!  You can say what’s in your heart.  You know that whatever you say will be ok, right?”

“I don’t mind interviews,” she said, “But this is wayyyyy better!  I will become known as the Sister who has never been interviewed, because I always do readings and distract them by helping them with their own personal issues!  It’s brilliant!”

On the remainder of the drive up highway 99, we talked about many things. Bullets and pellets, our name for a new CBD product we are developing, the development of our rosary to help us count during our chants, the wholesale program and anticipated demand.  We spent a few minutes comparing notes on family gossip that they don’t know comes right back to us, because in every Sisters’ family, there is at least one silent supporter among the haters.  If our families say bad stuff about us, we hear about it.  If a lawmaker or law-enforcement person says something bad about us, we hear it.  We believe the concept of ‘having a mole’ is ancient wisdom and contributes to the survival of the tribe.

In some cases, the families are split over the issue of our very existence. Mom’s side is a group of supporters, Dad’s side is suspicious haters.  Or vice versa. In my own family, some believe we are mocking Catholic nuns.  Nothing could be further from the truth.  First, we have great respect for their excellence in teaching and nursing, their vast contributions, and we strive to emulate their system-run, dependable standards of excellence.  But secondly, and more importantly, it is the very fact that the people out protesting miss having the nuns and priests at their sides, fighting the good fights right there alongside the working class angry -- it is that fact that called this Order into being.  The people asked for us.  Thirdly, it’s not a competition and fourthly, we are Beguine-revivalists.  The only ‘nun moniker’ we claim is the ‘weed-nun’ handle.  It says everything in two succinct syllables.

I find it ironic that the people who should be most embracing and supportive of this new age path we are walking, should be family and local politicians and lawmakers.  It is ironic that we have so many followers from around the world who understand us, love us, support us, but in the arms of our tribe, we suffer the bearing of false witness. 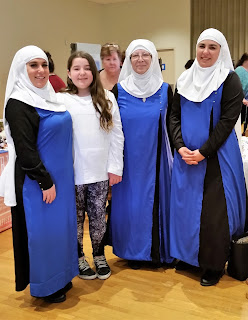 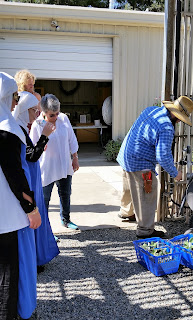 Before heading back to Merced, we visited a community college agriculture-day fair and bought some clary sage and white sage plants for our garden. 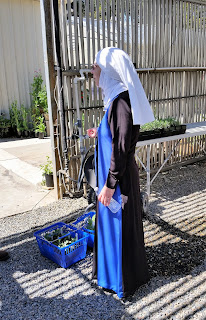 Just before arriving at our destination in Sacramento, we gave a little time to our manifesting powers and spoke of our dreams of travel.  Two of us are going to Brazil in May to speak at a conference on cannabis and morality and we collectively hope that that turns into more offers from other countries.  Personally, I want to take a trip to Greece, perhaps with stops in France (to see a Bougienage), England and Ireland.  Except, I lamented, I really want to travel with all the Sisters and that would shut us down.  “We will have to take turns,” I concluded.

That led me to reminding the Sisters that I am still the sole voice of the Sisterhood.  Ever-on-the-look-out for ways to lighten my load and make a system-run organization not dependent of any one Sister – ever ensuring I have future choices – choices to go, choices to send someone who would represent us well, I encouraged Nia to consider public relations (social media posting) on behalf of the Sisters. I threw out a couple of topics that would be good starter subjects, promised her that I would get her access to the dropbox for photos, and pushed my personal agenda along its path.

“Think about writing and sharing your wisdom.”  That was the last thing I said before shutting off the engine of the car and embarking on our adventure at the Healing Arts fair.

An hour later we were in a group reading with Dr. Christian Toren, a Master Clairvoyant from Burbank, California, who works primarily with the archangels and he was telling Nia that Archangel Gabriel says she has to share her knowledge.  He told her that she’s been collecting it all her life and she needs to get it out, get it on paper, share it with the people.

I was kind of impressed that he went there, first, and, sitting right next to Nia, I said “Blogging, blogging, blogging”.  But every time I said it, Dr. Toren winced, and finally, the third time I repeated it, he said “No, please, no flogging!”

It was my turn to be horrified, but Sister Freya and Sister Nia were both laughing so hard, hands over their mouths, trying to stifle.

Dr. Toren apologized, but he, too, was laughing so hard he had to wipe tears out of his eyes.

We must have had some mischief-making gnome-interference, because he went right back to talking to Nia about why she must write, about how her ‘not writing’ is affecting her stomach and sleep, and then exclaimed “You are meant to inspire!”  The noise level of the convention hall had risen a bit and Nia didn’t hear him properly, although Freya and I heard him clearly.  Nia looked horrified, while Freya and I were nodding and smiling in agreement with his words.  We realized quickly that Nia had turned pale.  “I was meant to expire?” she said. “When?”

“INSPIRE!” we all three hollered at once.  “Inspire!” I said again, to make sure she heard properly this time.  Good grief.  Blogging, flogging, inspire, expire, what the heck? 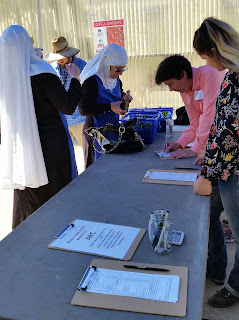 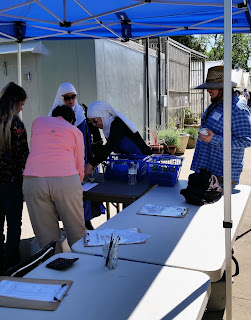 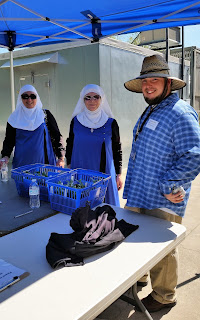 Brother Andy hooked us up. 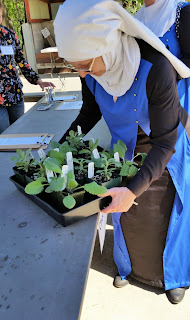 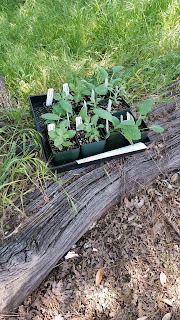 www.sistersofcbd.com (click the ‘shop’ link at the top to see our products)

Posted by cannabiskateincalifornia at 9:24 AM 22 comments: