On the Path to Hollywood 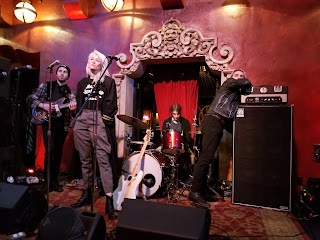 When Jackie Huntington first reached out to us, over a year ago, to ask if we would consider being in and hosting on our farm Ollie and Nesta, to make a music video, we listened to the music and immediately fell in love with Ollie.  We didn’t know who the artist was, when Jackie first approached.  We guessed Taylor Swift or Halsey.  We debated about it for weeks, as we listened and thought about it.

More than one good, strong, Sister came to us as a result of watching Jackie’ Refinery 29, her short documentary on us.  There isn’t much Jackie could ask of us, that we would deny her.

We often accept requests from odd places (the Charlo Green show), and sometimes regret those decisions, but in this case, I convinced reluctant and saintly Sister Sierra that the song isn’t really about having sex and smoking weed and getting couch-locked.  I convinced her that the song is about what happens when one doesn’t have a purpose-driven life.  She accepted that and we agreed to hosting and playing our part in Jackie’s production.  (Merced county should thank us for the people we bring into the valley.  People who rent camera equipment, trucks, and stay in hotels, eat at restaurants, and fuel their cars, locally.  Just saying.)

Our next interaction with Ollie, and her manager, Evan, was in the release party for the Sex, Weed, TV music video in December.  We got to know Ollie a bit better on that trip.  And our next interaction was just this past weekend, as we came to Hollywood to rehearse and perform as the Supremes to her Diana Ross.  Ollie is a sweetheart and it was touching to form a circle before our performance and pray together, for blessings from Mother Goddess, for her success, and so the Sisters didn’t trip and fall on our asses with all the cords and equipment on the small stage.

It just so happened that on our way down to Los Angeles, we stopped in Santa Barbara to attend the film festival and answer questions after the two showings.  I was so thankful to have Sister Alice and Sister Sierra by my side, happy to sing with me for the audience, a Randy Rainbow song, ‘All About His Base’.

Our first showing was sold out and our second showing was very well attended for 8:20 a.m. on a Sunday morning.  Breaking Habits (the movie) was well-received.  The audience had great questions and it was fun to answer them with Rob Ryan standing next to me, the award-winning producer of our documentary film.

“The film shows a picture of you with two boys, where is your other son?”  Easy.  He’s an engineer on the coast and has kept his social media distance since his university days, when I was Sister Occupy.  He has a career to protect, is all.

“Can you speak numbers? Numbers of Sisters?  Numbers of sales units?”  Easy peasy, as well.  I did.  I gave her the best numbers I had readily available in the filing cabinet in my head, annual history of gross sales, salary ranges, and explained how I now have to guess at the number of sisters because other orders are growing and other sisters have been given the authority to bring in others, in other countries, like Canada and the U.K. and New Zealand.

“Is there anything about the making of the film that either of you would like to share?”  (Don’t go there, Brother Rob, I whisper, and he smiles, relieved that we don’t have to pick at the still-tender sores of the difficulties we traversed to get to this point of standing on that stage, taking questions from a kind, considerate, and educated audience.)

Good Deeds Entertainment informed us that the highway 101 was closed in the early afternoon of the day of our red-carpet walk, and that the red-carpet walk has been postponed.  Their representative also asked if we could stay another night.  I was so relieved.  I feel like I personally prayed away the red-carpet walk.  “Glen Close had to turn around go back to Los Angeles, but she’ll be here tomorrow night and the red carpet is on for tomorrow night if you can stay . . .”  I was so relieved we had to be in Hollywood for a rehearsal and couldn’t stay.  I wanted to confess that I prayed away our red-carpet walk (as much as I would have liked to meet Glen Close), because it’s unhumble and, frankly, stupid, in my opinion.  I get that Hollywood does it, and I get why they do it, and it’s not stupid at all for Glen Close, it’s logical, but it’s illogical for sister servants to be doing that kind of stuff.  I would rather smoke five joints on tv and pass out on a red carpet, then walk one.  Maybe my other sisters don’t feel the same, but I made it go away, anyway.  Or Mother Goddess did.  Same result.

When we finally arrived at the Bardot Theater in Los Angeles Monday night at nine p.m. for our performance, we had all had sick stomachs all day, and alternated trying to get our attention off of the upcoming performance, and gathering to practice.  Our job was to sing Nesta’s lines in the “Sex Weed TV” number and the chorus for “Please Don’t F*** Up the Whole World, Mr. President”.

We had to rap these lines:

All I ever do is trying hearing you out when you have a problem you know you can bring it to me.

That’s the first line.  No punctuation.  No pause, one breath, one long sentence with three little ones in it.

Tired of 9 to 5, too much time this regular life is taking from me.
I gotta slide, when I’m low, I know you’re coming like medication for me.
High, take a ride, I am so over this week. 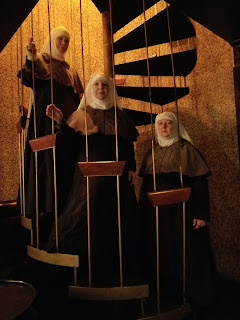 A nice man named Mark, whisked us out of the crowd and gave us a personal tour of the theater.  We saw the den where the rat-pack once hung out, the stage where the Jerry Lewis show was filmed, where the Hollywood Palace was filmed, and where Judy Garland performed.

We had time to kill and after practicing on that same stage for a half hour, we went into the room that was a private lounge for those very stars, not more than forty years ago.

After all the excitement of practicing on a world-famous stage, touring the behind the scenes bungalow of the stars, we sat quietly in Jerry Lewis’ dressing room and wondered how we got here.

“They say, look at what you were doing when you were seven years old, and that’s your destiny or calling.”

“What were you doing, then?” I asked Sierra in response to her profundity.

“Oh, I was wanting to learn guitar, but my mother was troubled and she used it as a weapon against me so I wasn’t much encouraged.  But I liked music.” Sierra answered.

“I was gathering up the neighborhood children, with a white pillowcase on my head to mimic Sister Cecilia and organizing musical talent shows.” I confessed.

“Funny thing,” said Sister Alice wistfully.  “I was organizing my dolls and teddy bears to be my audience and stage-props as I performed musical commercials.”

We laughed.  And then it was quiet again.  The brothers were somewhere out of earshot.

“But now we have gone from singing about sex, weed, and tv, to saying the ‘f’ word and shouting ‘asshole’,” Sister Sierra mused aloud, ever protecting our image – ever-protecting our name.

“Do you think people are really bothered by that, when our president is putting children in cages?” Sister Alice countered.  "We aren’t supposed to swear even when swearing is called for?”

“What, you think if someone lays out a line of cocaine here, we’re going to lean forward with rolled up dollar bills?”  Alice asked, making the two of us laugh at the image.  “You girls worry too much,” Alice lectured.  “We are taking on the tough issues, and the Goddess has our backs.”  She was right.  “And anyway,” she added, “This is Ollie’s show.  We are simply back-up to her music.  When we do our own music, we don’t use any of those words.”

We spent the next ten minutes walking up and down staircases that seemed to go somewhere, but it was an optical illusion.  It seemed every route led to locked doors.  We started to get frightened that we would miss the performance and made our way back near the main stage where we started, to get help getting out.

We formed a prayer circle for a second time, Ollie, Sierra, Alice, me, and said a final quick prayer that gave us the courage to bounce onto a stage that had hundreds of people cheering us.  Maybe not hundreds.  It just felt like that many.

When we sang, we put our hearts into it, for Ollie, for Evan, for the musicians and musical appreciators gathered.  It was a magical experience for all of us, and this time, we are very happy we swallowed the fear and walked right into it.  Ollie and Jackie have promised to join us on the farm sometime in the next two moons, for a quiet retreat, as the anti-dote to the glamour and glitz.

Posted by cannabiskateincalifornia at 4:18 PM