The Gangsta Side of Growing Ganja (with a dash of Sisterhood)

There is so much I don’t know about what I call ‘the gansta side of growing ganja’.  I’m just a simple Sister, trying to eek out a simple existence, while serving the people.  I know of no other way to do business than with complete transparency . . . open books, open attitude, open dialogue, democratic decision making.  Anything else is foreign to me.  In the grower’s world, however, everything is stealth.  Everything is done on a handshake.  Nothing is written down.  It is this contrast between my modus operandi and the growers’ that creates all the tension.

I am not saying that all Hispanic men are old-school, sexist, bullies, who think men should make all the decisions, but all the Hispanic men I have worked with are all that.  For many decades, cannabis growing has been their domain and for many decades, the women pretended it wasn’t happening and stayed out of their way.  Then they met the Sisters, who have their own way of doing everything.  The Sisters who are unashamed, unapologetic, and feel like we are on a mission from God. And that is the basis for many culture clashes in our ganja growing operations.

“This is a very, very, very special strain.” Chico told me one day last season, as we were visiting and checking up on the Ladies.  “You have to be specific, when you tell people about this strain, because it’s not just ordinary strawberry diesel.  It is strawberry diesel coffin cut.”  When I heard the words, my brain thought ‘cough and cut’, not ‘coffin cut’.  But I just listened as he extolled the virtues of that plant, knowing I would be at my computer later to properly research the strain.

I listened with grave attention to him warning me to specify to all buyers the true nature of the plant, by using the full title.  “My home-boy paid five thousand dollars for a little tiny cut of this plant, and he only let me buy some clones if I promised him that I wouldn’t make any clones that weren’t just for me.  We can’t let this strain go out the door.”

“No, it’s not an ordinary plant.  It has been bred for maximum THC and maximum output and it’s in high demand with the coastal dispensaries.  You’ll sell the shit out of this, Sister.”

Ok, Chico, Ok.  That was in the autumn of last year.  A few months later, Brother Larry and I had produced our first line of products to initiate a market trial.  In the ingredients, on the labels, it clearly says “Strawberry Diesel Coffin Cut”.  When Chico, our grow foreman, saw the line of products, he whistled.  “Wow, Sister, these are really nice!”  I don’t know if he read the tiny print next to ingredients.

This week, I learned that Chico got in a bit of trouble over our labels. I didn’t learn this from Chico, but from his growers, who were talking about it in the garden when I suddenly appeared.  “What are you talking about?” I asked, having overheard a bit of the conversation.

Sometime in the past four months, one of our bottles of tincture made its way into the hands of the man who sold his proprietary strain for five thousand dollars a clipping.  He saw it and then asked around until he determined who grew for the Sisters of the Valley.  Then he called Chico in and said (basically) “WTF?”

“These guys are bad-asses,” said the man explaining, the younger of Chico’s two crewmen.  “They cut off people’s arms for violating treaties.  But don’t worry about it, Sister, Chico handled it.”

I wasn’t worried.  Just puzzled.  ‘Didn’t he tell me to be specific?’

Later that day, I saw Chico and asked him about it.  “I didn’t know you were going to put it on your labels,” he said.  “I’m not sure I even knew you were making a line of products . . ."

This week’s confrontation happened because the Sisters’ co-opted Chico’s work crew to help us with our harvest.  This time of year, good, experienced harvest teams can choose where they work and we weren't really ready for an early harvest.

We had a meeting, Chico, his team, the Sisters.  At the time of the meeting, we all agreed that starting the very next day, Chico’s team would be in to work with the sisters for the first six hours of every workday until we got caught up from what we call the Ballico breakaway.  Ballico is where we had a rather large crop going (sixty plants).  We had to harvest early – and suddenly -- because every day for four days, the thieves made a visit and on the fourth day, there was a shoot-out.  We harvested and were out of our location by one-thirty in the afternoon on that fourth day. 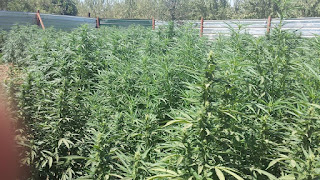 One of my most favorite old movies is Lilies of the Field with Sydney Poitier.  The Mother Superior wanted a shshshshshapel (chapel).  No money, no work crews, but she wanted that chapel and the whole movie was about her getting it.  Chico is my Sydney.  He says ‘No’ much more comfortably than he says ‘yes’, and he has tried to say ‘no’ to me many times, but I just don’t accept it.  Just like the tough old bird in the movie.

Chico is a good guy -- old school, but big-hearted.  One of his crew members is a recovering meth addict.  So, when that young man came by the abbey, unannounced, after a successful court hearing, we welcomed him in, made him some tea, sat to hear about what happened.  He has only been off the powder for eight weeks, and only six weeks ago, he joined our foreman's work crew.

Later that night, Chico stopped by to scold the sisters for being too soft on his men.  “You Ladies molly-coddle them!” he complained.  “You give them tea and cookies and act like it’s all guns and roses!” Chico frequently mixes his metaphors, English not being his first language.  We don’t laugh, though, because he’s not the kind of man who takes teasing lightly, and especially not when he’s intent on making a point, as he was the other night.

Well, sometimes we can't resist.  As soon as a reasonable amount of silence passed as a sort of ‘we’re listening’ from the Sisters, Sister Darcy said “Would you like some tea or cookies?”  And I couldn’t help but add, “Or maybe today you would rather have us serve guns and roses?”  Both of us began laughing, then, and had to live with the fact that Chico waved his hand dismissively, and stomped away.

We didn’t get through one day of the new work schedule, without Chico blasting me for commandeering his team during his busiest season of the year.  Chico was at that meeting, Chico agreed to the schedule and the staffing and to the whole plan.  When I reminded him of that, his only response was a good one.  “I can’t say no to you, Sister.”  Awwwwww.  So he’s a raging bull because he lost his work crew, but he agreed to give them up to help us and now he’s angry about it.  “So you are really mad at yourself because you can’t say no to me?”  I laughed.  “How delightful!”

Somehow, we have to get caught up on our harvest and give Chico back his men, at least part time.  We will work that out.  Can’t have a grumpy foreman.  He’s building our chapel. 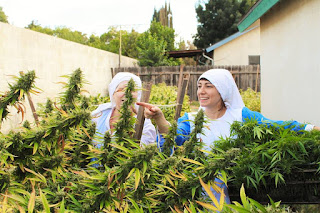 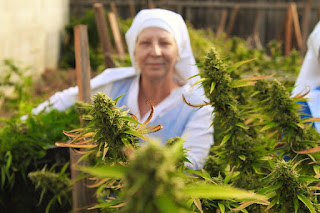 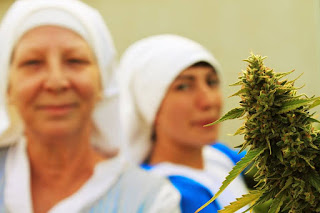 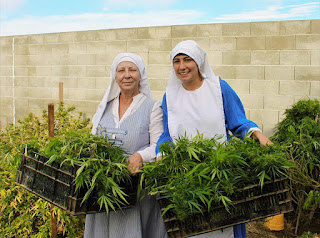 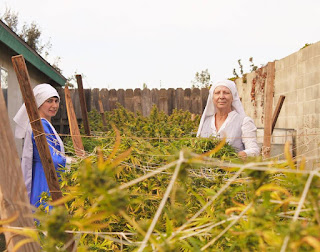